The Sicilian Cart is the symbol of folklore and craftsmanship. It represents the desire and seeking of beauty of the Sicilian people – due to its nature of being a practical transportation vehicle used for work, yet made into a stunning piece of art.

If you had the pleasure of seeing one, then its intricate and rich beauty is probably vivid in your mind. However, if you have not yet experienced this work of art, let us tell you about it. 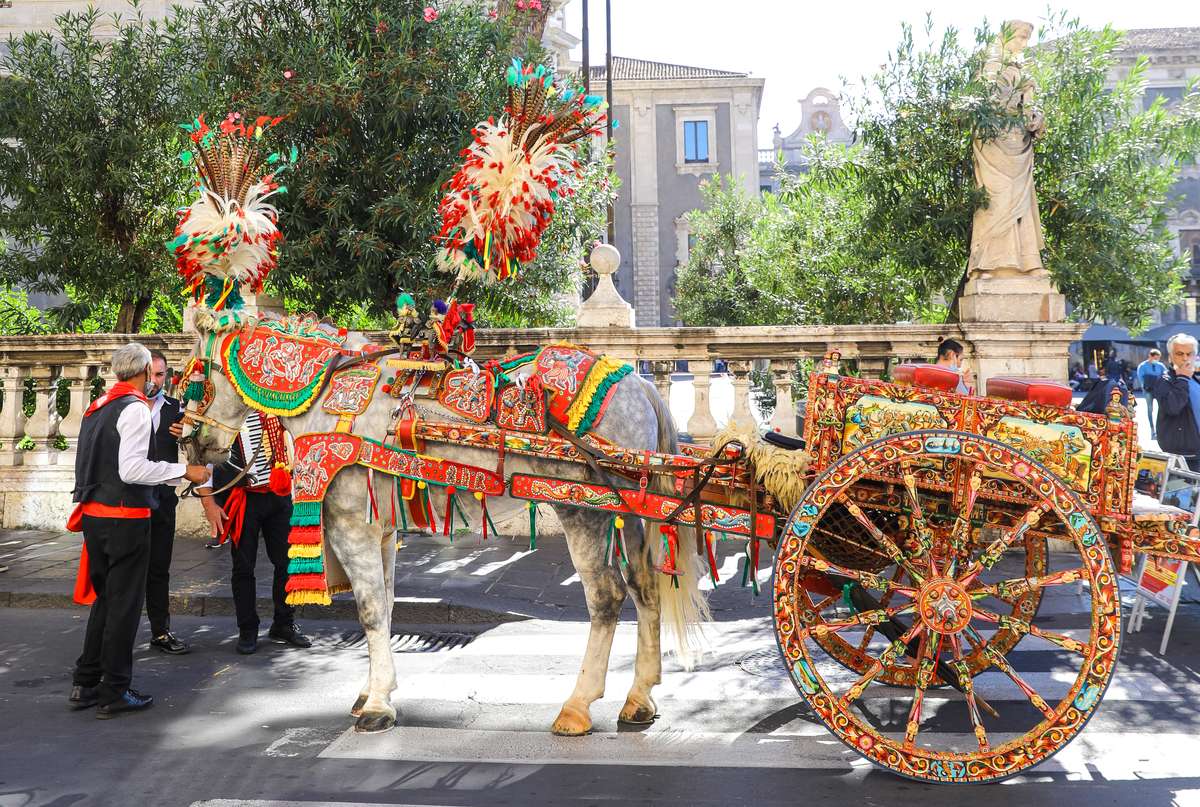 What is the Sicilian cart?

The Sicilian cart is generally two-wheeled, horse-drawn carriage. It is decorated with Sicilian folk iconography in the form of paintings, sculptures and fabrics that represent moments from the island’s history, forms epic stories of popular religion or depicts scenes from everyday life and nature.

The decorations cover the entirety of the cart and use vivid colors of reds, yellows, oranges. The Sicilian cart is an ode to Sicilian history and the way of life on the island.

In recent times,  the Sicilian cart exists as a unique mode of transportation used mostly for special events, weddings and folkloristic feats. For example, it plays an important role in the Festa di Sant’Alfio which takes place in the village of Trecastagni.

The carts, that leave at night from Catania and from other Etnean villages, arrive at Trecastagni in the morning, gathering in the square of the village.

In Catania, Palermo and other towns of Sicily, there are  notable schools specialising in the construction and decoration of the cart.

It is worth acknowledging the works of Bagheria and Aci S. Antonio, known for the paintings of the carts, and those of Floridia, Vittoria, Valguamera and Scordia. 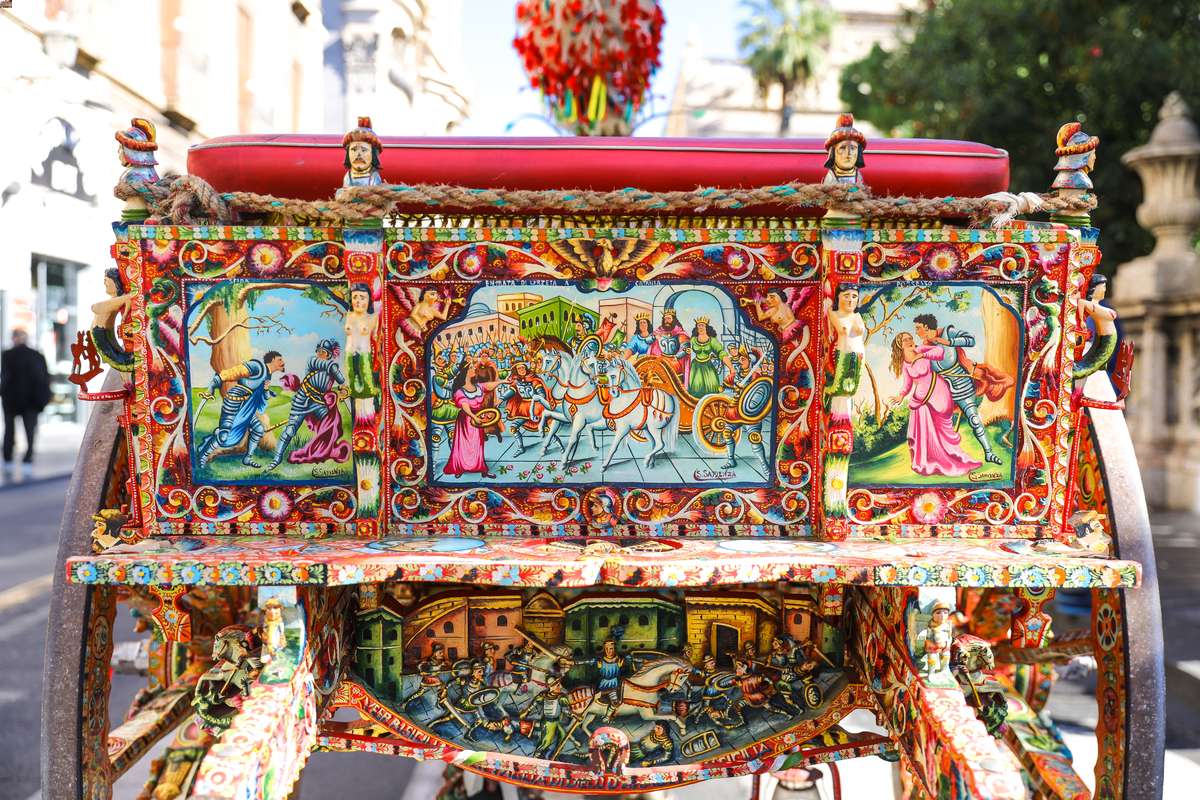 The history of the Sicilian cart

It wasn’t until the end of the 18th century that road conditions improved enough in Sicily to allow transport by wheeled carts.

Previous to this, most of the island’s transportation was done by boats or mules. Transporting goods with a cart was a prestigious occupation and owning a horse drawn cart was a status symbol and demonstrated wealth and success.

Hence, the embellishment of the carts began. The more intricate the cart was decorated the more the businessman had invested in a talented craftsman, hence showing off his wealth.

The creation of a cart required a complex organization of tasks and involved multiple groups of skilled craftsmen with different specializations. 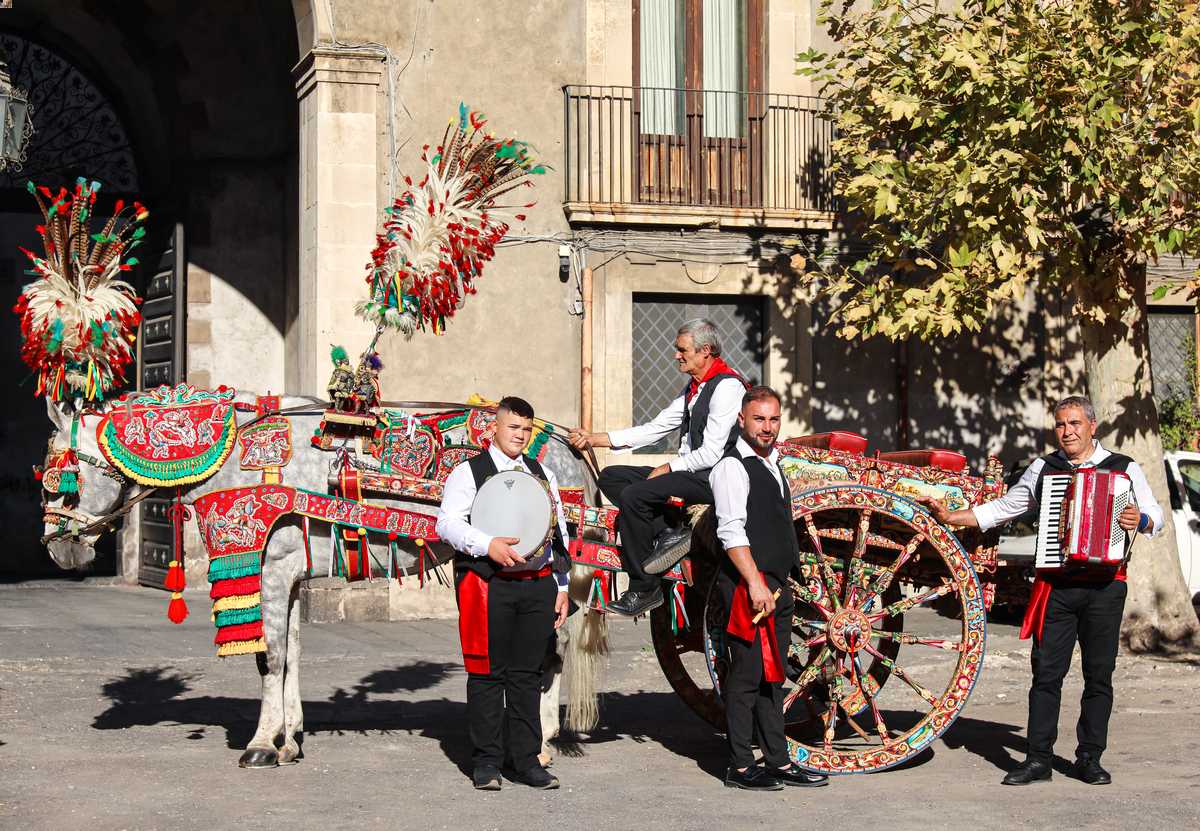 The use of the Sicilian cart today and tours

Today, the Sicilian cart appears primarily at special events and weddings. It is the perfect addition of Sicilian tradition that brings an authentic presence and is loved by guests young and old.

Due to its traditional beauty and interesting history, many visitors to Sicily love to get familiar with the Sicilian cart. We offer tailored tours and experiences with Sicilian carts, allowing you to do just this.

Why not sit back and enjoy being at the centre of attention as you ride through the heart of Taormina on board of a traditional Sicilian colorful cart. Alternatively, you could discover the secrets of Catania through its beautiful buildings and churches onboard a Sicilian Ape Car decorated by a local artist.

Contact us and we can make this special experience happen. It will surely be a memorable and joyful addition to your trip in Sicily.

The future of the Sicilian cart

With the introduction of motorized vehicles, the cart has lost its original purpose of transporting goods and has taken on a symbolic role of cherishing folklore, becoming the relic of a now endangered set of customs and traditions. Currently the carts are used for events and special occasions and can often be admired at public festivals.

Although it is much rarer now, the knowledge of cart making artisans has not disappeared. Passed down from father to son, these rich and complex skills are continued by craft families like the Cinabro family in Ragusa, who help to keep the tradition alive.

The younger generations also shape and form the tradition. Keeping up with the times, they apply their mastery to new mediums such as cars, appliances, murals, etc. Like this line of SMEG appliances designed with the motifs of the Sicilian cart by the Cinabro family for Dolce & Gabbana. The luxury brand itself has taken inspiration from the cart, as a symbol of Sicilian tradition and folk iconography.

For those interested in the finding out more about the history of the Sicilian cart, we also recommend a visit to the Museo del Carretto Siciliano in Bronte, in the province of Catania.