Sicily Through the Eyes of Ennio Morricone

Ennio Morricone, one of the most brilliant Italian composers of all times, has passed away on July 6th, 2020 at the age of 91. Our nation lost a beloved artist, but his work will be forever cherished by Sicilians, Italians and all music lovers around the world.

Ennio Morricone’s work and his film scores are forever connected with the history of cinema: Once upon a time in America, the entire Spaghetti Western genre, Mission are just a few of the music score masterpieces he composed.

The Maestro had a special connection to Sicily — both through his wife and his work. Despite his international recognition and fame, it is with a Sicilian director that he had the most enduring partnership: Giuseppe Tornatore.

As the Maestro once said, “I married a Sicilian and this allowed me to fully understand the Sicilian culture, but it was through the art of Giuseppe Tornatore that my beliefs about this island were proved to be real”.

The long lasting partnership between the Maestro and Giuseppe Tornatore is quite consistent and in fact includes 13 movies, among which three movies best represent Sicily in all its beauties and contradictions: Cinema Paradiso (1988), Malena (2000) and Baaria (2009).

Cinema Paradiso, shot between Bagheria, Cefalù and Castelbuono, was the first collaboration between Morricone and Tornatore. 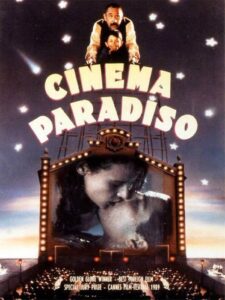 When Ennio Morricone was first asked to compose the music for this film, he rejected the offer as he was already committed with a Hollywood production, but when he was given the script of the movie, he got emotional reading the last scene (the legendary censored film kisses montage) and finally said yes. The film score written by Ennio Morricone and the cinematography of Giusppe Tornatore brought to life one of the most beautiful and nostalgic portrayal of Sicily and Sicilians and won the Academy Award for the best Foreign Language film in 1990.

Another example of a perfect combination of film making, music and photography is Malena which is always considered as a controversial movie due to the sexual themes and the depiction of a very close-minded and sexist behavior of the Sicilian People.

Ennio Morricone music themes perfectly accompany the beautiful Monica Bellucci as she walks across the square of the Duomo in Siracusa under the judgmental looks of the women and the adulatory ones of the men.

The music in Malena is a perfect mix of Sicilian sounds: the music of the traditional processions of Saints and a more intense music that can convey the tragedy of a woman whose beauty becomes a curse.

We can find the same atmosphere in the commercials shot by Tornatore for Dolce & Gabbana in 1995 and 2003 featuring once again the beautiful Monica Bellucci. The black and white and the dramatic music of Ennio Morricone show Monica Bellucci as a Sicilian femme fatale chased and desired by Sicilian men.

Ennio Morricone will compose again for Dolce & Gabbana, this time with the great Sophia Loren in the beautiful setting of Villa Valguarnera in Bagheria.

Baaria, Sicilian for Bagheria, is important for Ennio Morricone for several reasons: it is the home town of his artistic son Giuseppe Tornatore and it is the town that in 2006 tributed Morricone with the honorary citizenship, making the Maestro an effective citizen of this beautiful Sicilian noble town. But Baaria is also yet another product of Tornatore and the Maestro partnership, a pure declaration of love to Bagheria and Sicily that encompasses 50 years of Sicilian history. It is in the piece “Symphony for Baaria” that we find all the love and respect that Morricone had for this ancient noble town and for the traditional music and Sicilian instruments like Zampogna and Marranzano.

Although Ennio Morricone lived all his life in Rome, it is undeniable that with his compositions he could convey emotions and feelings of “ Sicilianity” as only a true Sicilian would.

The pain and nostalgia of leaving Sicily to find fortune abroad in Cinema Paradiso, the feelings of lust and love for a Sicilian woman in Malena and the sounds of the marranzano and the voices of the people of Baaria transformed in music will forever be his gift and his immortal legacy to Sicily.